What would school be like if every so often (or always) we didn’t race in the Daily Academic Decathlon: teaching  reading, writing, math, social studies science, art, engineering, music (oops….), PE, and technology? 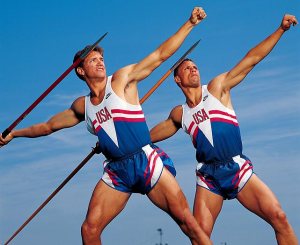 I grew up watching Dan and Dave, but I bet they didn’t train for every event all day every day.  I bet they focused and went deeper in their training.

Yes, yes, yes…I don’t believe those are all isolated subjects and most aren’t subjects, but we do this in school all the time. I have completely gotten pulled into this and because of trying to do it all, at times we are accomplishing nothing (ok, that’s not true, but sometimes it just doesn’t seem feasible to do it all and then we are always a dollar too short.)

What would happen if we took a week and focused on becoming a scientist, an author, an engineer, a mathematician? What would happen if we just dove into a content area, topic, current event and engaged our entire being in it? What if we became mathematicians for the week? What if we, “play(ed) the whole game”  as stated by David Perkins  in Making Learning Whole? What if students came to expect that, “a large part of their learning in the subject area involved acquiring the thinking abilities and processes of the discipline, not just learning about it for the test.” as stated by Ron Ritchart in Creating Cultures of Thinking? What if parents would focus on the learning and not just the test grade or the completion of the HW assignment?

Well, we went for it. We spent the last week as Mathematicians investigating math. Where did this idea stem from?

So what did we do? We emerged ourselves in math. We played. We modeled mathematics. We looked for patterns. We read about Mathematicians. We explored the mathematics of ancient civilizations.

When students see math as a broad landscape of unexplored puzzles in which they can wander around, asking questions and thinking about relationships, they understand that their role is thinking, sense making, and growing. When students see mathematics as a set of ideas and relationships and their role as one of thinking about the ideas, and making sense of them, they have a mathematical mindset.

And I think that this “mathematical mindset” is really a thinking mindset.  No matter what we are doing, the fun comes when we think, question, and reflect.

As always, there were things that I loved and things I wish I had done better.

Each day we had a Big Idea and Details to help us focus.

Big Idea:  Mathematicians create viable arguments and critique the reasoning of others.

Another day we focused on…

Big Idea: Mathematicians look for patterns and relationships to make generalizations they can use.

We truly engaged in the Standards for Mathematical Practices and made time to think. As I look at this list from Ron Ritchart, I do think we have a classroom culture of thinking.  The biggest gift that this week brought us was the gift of time. 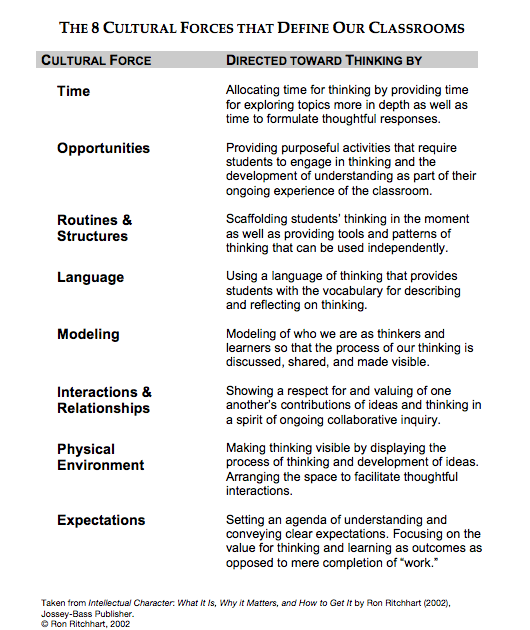 My other love was having parents join us.

By the way, why is it that I could not find a single positive clip art of a parent and child doing math together. Reading? It’s all over the place. Math? It is always an image of frustration. Ughhh…

“Wow, I am having fun. I wish math was like this when I was a child.” Pretty much, what this mom was saying, was that she wished she was allowed to think and make sense of math.

After doing Andrew Stadel’s Post-It Three Act Task http://www.101qs.com/518-file-cabinet–act-1, a parent responded,”That was great. I went first to thinking I need to find the number of post-its and what is the easiest way for me to do this. Then I looked over at my son who was finding the entire surface area and then dividing by the post-its surface area. At first I thought, that is so inefficient. We had a great conversation at our table. Then I realized. Actually, he would have a better model. If the size of the post-it changed, he would easily be able to adapt for that. I on the other hand would have to recalculate everything.”

How awesome for students to learn with their parents?

After doing a visual pattern (from Mathematical Mindset), a Physicist (parent) said, “Wow, this is what I do all day long. We look for patterns and make generalizations.” Ahhh…thinking. Then he continued, “I need more time to wrap my head around this one though.” 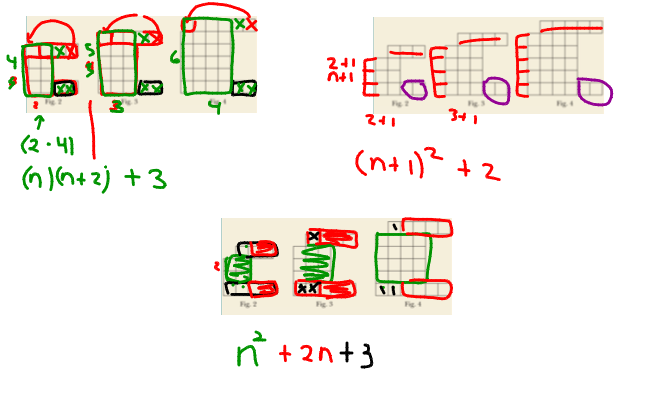 Another love…allowing our next learning be driven by student inquiry.

During the first week of school, we worked on the Four Fours: Use four 4s to make the numbers 1-20.  They loved this, but were having trouble finding expressions equivalent to some numbers so I introduced to them factorials. Minds blown!

A couple of weeks ago, we were working on a visual pattern 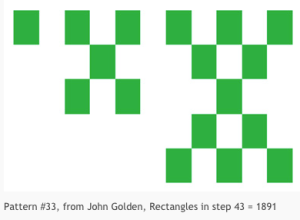 from http://www.visualpatterns.org (amazing amazing blog of patterns that Fawn Nguyen has compiled) and one student said,

“Ms. S, is there something like a factorial but for adding numbers in a row?”

Oh boy, I thought. “Yes, there is. We will definitely explore that. But, we need to do that another time.”

Well, our other time came during the week of math.  And, NRich came to the rescue with two great tasks to explore (Mystic Circles and Picturing Triangle Numbers ) and then an article the read.

We noticed and wondered for Mystic Circles, noticing the adding of sequential numbers.

and then we looked for relationships in Picturing Triangle Numbers

After, we went back to look at the two strategies for solving the Mystic Rose

and students developed arguments for each strategy.

What I wish I had done better at….

Preparing students for having their parents in the class.

While we as a class have developed a classroom culture where mistakes are important and our goal is to learn and not just perform, that does not mean they have that culture with their parents. I had one child breakdown due to wanting to “perform” for his parent. He has never broken down in class, but I see this desire to “perform” and the pressure (self imposed?) really got to him.  This was a good wake up for me, as while we might be on the way to creating this culture, it is going to take a lot more work to bring it into every home.

I also wish more parents could have joined us. I know there was some fear, as one parent shared, “6th grade math is intimidating”. I just wish more could have come to see how open it really is. I need to figure out how to share this with more parents.

We didn’t do a bad job on this. The connections we made throughout the week were incredible. We were connecting ratios to graphical representations and then questioning/wondering and analyzing if the visual patterns we have been working on are proportional. Do all graphs of equal ratios create a line through the origin?  We were connecting our work with visual patterns, to the work we did with triangle numbers.  We were connecting and comparing the many different strategies students used when solving Sugar Packets (which I adapted and probably made a bit too hard. Though, the students persevered and definitely engaged in some productive struggle.) and the Leaky Faucet. We were connecting the representations to equations to words. We connected and compared our base ten system and place value system to the Babylonian’s base 60 system and the Egyptians base ten, but lack of place value.We were extending ideas and connecting to the math practices.  We were deepening our learning by creating arguments for a claim being Sometimes, Always or Never.

But, it was mostly oral.  I wish I had recorded the connections so that they were more explicit, and had the children record the connections they were making. I wonder if when we come back to class, we can look back on the various problems and explorations we did and make those connections explicit. They were explicit in my mind when I chose each problem, but I wonder how explicit they are in every students’ mind. I think this will make the week even more powerful than it was.

How can I create this type of week in my class every week?  Can I extend math on some days to allow for more processing/thinking time? Can I extend our time to write, so we aren’t constantly starting over? Can I really help focus our learning more on one topic, so we can go deeper and allow connections to be made? What do I need to add to make all the connections and thinking even more visible so that students can transfer to other parts of their lives?

It sure is a good thing I have 2 weeks to process this and develop a plan. Time to reflect is good. I will  make it happen.

One thought on “Thinking and Engaging…A Week of Math!”